Some of the breeds that are considered brachycephalic include:

Dogs suffering from BOAS may have issues with their nostrils, tonsils, larynx and soft palate. 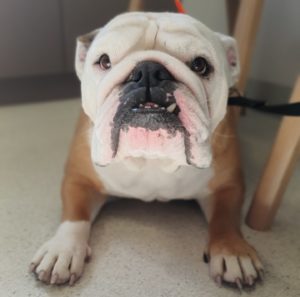 These are the common BOAS symptoms

Some dogs may seem to cope quite well with BOAS (or perhaps people consider some of the symptoms listed above as “normal for the breed”), but dogs with these features have been selectively bred over the years for their appearance, rather than for their ability to breathe easily and this can lead to long term health detriments.

The only treatment for dogs suffering from BOAS is surgery.

A dog with BOAS may deteriorate with time, so the sooner intervention is done to help, the better the expected outcome. The surgical procedure(s) required to correct BOAS are done under general anaesthesia. Surgery is far less risky if the patient’s symptoms are only mild or caught early (when the patient is young).

There are however a few things you can do that may help lessen your dog’s symptoms.

What happens during a BOAS surgery?

Each dog is different and so surgery is tailored according to what is required. Below are the three most commonly performed procedures to correct BOAS.

As seen in Fig. 1 below, the nostrils of a brachycephalic breed tend to be very narrow, making it difficult for them to breathe. During surgery, the nostrils are trimmed to allow for a larger opening and in turn better intake of air to assist with breathing. 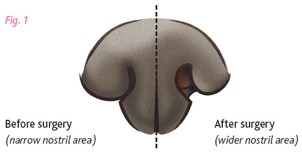 Brachycephalic breeds tend to have an excessive amount of thickened soft tissue that hangs down from the roof of the mouth at the back of the throat. This area is known as the soft palate.

As shown in Fig. 2 below, a brachycephalic breed’s soft palate can be so long that it narrows the opening to the trachea, again leading to further stress on the dog’s breathing abilities. 3. Removing saccules in the larynx

Laryngeal saccules are air sacs located between the vocal folds and laryngeal wall. When everted or excessive, these saccules narrow the opening of the dog’s windpipe which can cause an obstruction as seen in Fig. 3 below. 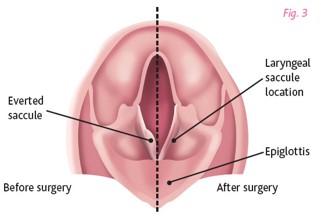 During surgery, the laryngeal saccule is resected to widen the opening to the trachea and again aid in better breathing.

BOAS surgery requires specific surgical techniques and specialised equipment. We enlist the help of a roving specialist surgeon who comes in to our clinic to perform this specialised surgery, ensuring our patients receive the best care.

Lilo the French Bulldog was suffering the symptoms of BOAS and underwent surgery here at Lynbrook Vet. Assisted by the team at Better Vet Referrals, Lilo’s surgery included the widening of her nostrils along with shortening of her soft palate and resection of her tonsils and laryngeal saccules. At the same time as her BOAS surgery, Lilo was also desexed. Performing the BOAS surgery between 6-7 months is ideal, not only allowing for early intervention of the condition, but also for minimising risks of anaesthetic complications and conditions relating to remaining entire (non-desexed).

Sometimes the surgery is staged for patients with severe symptoms. In these cases, the widening of the stenotic nares (constricted nostrils) is performed between 4-5 months to assist in the dog’s breathing and the rest of the procedure +/- desexing, is booked at a later date.

It is very important after such a major operation that our team monitor these patients closely.

BOAS surgery can involve risks such as airway swelling and aspiration pneumonia so constant supervision is given by a dedicated surgical nurse until the patient is fully awake and stable.

Lilo was such a brave girl for her surgery and recovered well. She visited us recently and is back to her happy-go-lucky self!